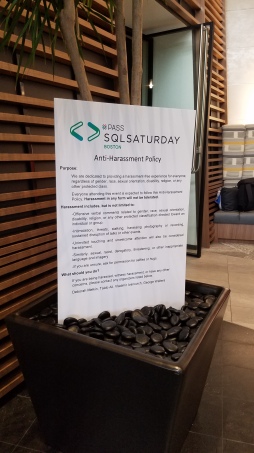 I took the following picture of the Code of Conduct prominently displayed at the SQL Saturday Boston held in September. As I was clicking away, a woman passing by shouted over to me, “It’s a shame we need one of those things…” It stopped me in my tracks because it wasn’t what I expected to hear. It really has stuck with me ever since. I was taking the picture because some events get criticized for not having a code of conduct at all and here we were – prominently displaying ours. Which we thought was a good thing. But it made me think a little more about that whether the pride was misplaced.

It seems to me that one of the biggest reasons for code of conducts, especially at tech events, is because of the harassment of women who have attended the event in various forms. Anti-harassment policies apply to everyone but women seem to have traditionally borne the brunt of the problems which have made them necessary.

Organizers of events are left to make the decision on how to handle those who have been accused of harassing others at their events either as speakers or just attendees. But when so many of the events are decentralized, even when they are under a large umbrella organization, I think it’s hard for organizers – especially newer organizers – to know who these people are. There’s no central reporting system to cross check to see if someone has been kicked out of a similar event for violation of code of conducts. Organizers are left to rely on the “rumor mill” where you have to get the story in front of the right people and you have to trust that it’s getting around correctly. And because it’s people passing along these stories, it starts becoming harder and harder to guarantee. We all remember the childhood game of “telephone”, right?

Then there’s reconciling the stories with seeing these same people who violated code of conducts still being included as speakers or members of special programs by vendors or community, etc. Then you have to ask why are those people there? Is it because those stories were ignored or is it because those involved never heard them in the first place? Or do those in charge not have proper guidance in how to handle these situations?

A code of conduct gives us a place a start. Although let’s face it, we shouldn’t have to tell adults how to behave appropriately and respectfully at professional events. But the other problem with a code of conduct is that they often only apply to specific events. Or at least on the scale that most groups use. How do we handle issues that arise after events – the indecent proposals at an informal, after event dinner? The “mansplaining” emails? The harassing tweets? If you aren’t privy to those, how do you as an organizer decide what to do? And how can it be clear that those actions outside the events play into people’s decisions to attend them at all? There are some women who have publicly said they won’t go to events if they see people speaking or attending who have harassed them or others. How do we create events where everyone feels safe, comfortable, welcomed, and valued if we don’t know and don’t have the means to take the appropriate steps?

There has to be something better than word of mouth to share this information. I hope there is more about how this does get handled than I know. If that’s the case, we should have more transparency into how this gets handled on a larger scale.

I feel I have a lot more questions than answers around this, unfortunately. All I can do is to try and speak up when I can and to encourage others to do the same. Writing and editing this post right now, I wonder what missed opportunities I have had to bring these issues up and worked towards a solution. It’s not always an easy task and I’m not perfect so I just need to continue to work to be better. I can also do more to support those who do a better job of educating others and actively work on solutions to these problems on the larger platform than what I have.

When I started this blog almost 3 years ago, I decided I wanted to have a post for every International Women’s Day. I am a Woman in Technology so I think it’s important to share my thoughts about it since we all have our shared and differing experiences. I’ve always wondered if I’ve been too optimistic in my past posts. What I love about #sqlfamily and the SQL Server community is that they truly are dedicated to supporting WIT activities. (And we should strive to be this supportive for all of those who are underrepresented.) We are a diverse community and I believe that the vast majority of our community supports and celebrates that. That’s why I’m very optimistic about our little #sqlfamily corner of the tech world and I feel like that’s why I can focus on the support that’s given in our community rather than the problems. I can’t and don’t pretend issues don’t exist but I have hope that we have the tools and desire to make it better.

Back to the code of conduct – I agree with the attendee that it is a shame that they are needed. But it’s that first public step organizers can take to remind everyone that they are expected to act professionally and respectfully at all events. And, more importantly, inappropriate behavior and actions have consequences.